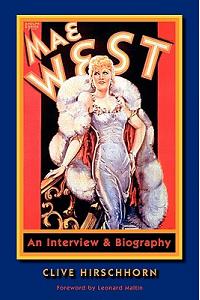 In 1968, noted film and theatre critic Clive Hirschhorn was a young feature writer for the London Sunday Express. In Hollywood on assignment, he heard that the legendary Mae West "loved British accents" and was able to get an interview with the 75-year-old film star. His observations on the "official" Mae and the actual woman behind the public persona provide new insights into this complex, much caricatured, and compelling cultural icon. This book offers a funny, touching, and revealing account of the life of the woman who made it possible to say "sex" in public. Her scripted quips are legendary, and she was able to zing them in real life. When Hirschhorn asked her how she managed to look so uncannily young-at 75 her skin was flawless and her face unlined-she replied:

"No secret. I go to bed early. I meditate. I eat all the correct foods, I don't smoke or drink, and I believe with a passion in myself. You can only beat nature when you show the bitch who's boss "

Leonard Maltin in his Foreword says, "Mae West was an absolute-and resolute-original. There has never been anyone else quite like her. Her reputation has survived the decades. Young people might not know of her, but she is still widely quoted and referred to in articles and books. How many other show business personalities who flourished in the 1920s and '30s can say the same in the first decade of the 21st century?"

Clive Hirschhorn is the author of the best-selling The Hollywood Musical, as well as Gene Kelly: A Biography, The Films of James Mason, The Warner Bros. Story, The Universal Story, and The Columbia Story.