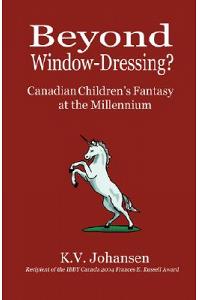 Beyond Window-Dressing? Canadian Children's Fantasy at the Millennium

In the late twentieth century, Canadian children's fantasy had a poor reputation internationally. Was this reputation deserved, and if so, has the quality of children's fantasy and the climate for its publication improved since that time? After a survey of twentieth-century Canadian children's fantasy, Beyond Window-Dressing examines these questions through an extensive cross-section of Canadian children's fantasy published between 2000 and 2004. From Palmer Cox and Catherine Anthony Clark to Judd Palmer and Alison Baird, and writers of international reputation such as Dave Duncan, O.R. Melling, Kenneth Oppel and Charles de Lint, Beyond Window-Dressing weighs Canadian fantasy against the best of the UK and US. It provides not only a window onto Canadian developments in the genre during the opening years of the twenty-first century, but insists that fantasy must be judged by standards as rigorous as those applied to any other genre of literature. K.V. Johansen held the 2001 Eileen Wallace Research Fellowship in Children's Literature from the Eileen Wallace Collection at the University of New Brunswick and was the recipient of the 2004 Frances E. Russell Award for research in children's literature from the Canadian section of IBBY, the International Board on Books for Young People. She has Master's Degrees in Medieval Studies (Toronto) and in English (McMaster), and is the author of a number of fantasy and science fiction novels for children and teens. Her 2005 book on the history of children's fantasy, Quests and Kingdoms: A Grown-Up's Guide to Children's Fantasy Literature, has received international critical acclaim and was short-listed for the 2006 Harvey Darton Award. The author's website may be found at: www.pippin.ca