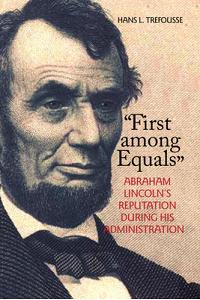 "first Among Equals": Abraham Lincoln's Reputation During His Administration

One hundred and forty years after his assassination on April 14, 1865, Abraham
Lincoln towers more than ever above the landscape of American politics. In
myth and memory, he is always the Great Emancipator and savior of the Union,
second in stature only to George Washington.

But was Lincoln always so exalted?Was he, as some historians argue, a poor
President, deeply disliked, whose legacy was ennobled only by John Wilkes
Booth's bullet?

In this fascinating book, a leading historian finally takes the full measure of
Lincoln's reputation. Drawing on a remarkable range of primary documents--
speeches, newspaper accounts and editorials, private letters, memoirs, and
other sources--Hans L. Trefousse gives us the voices of Lincoln's own time. From
North and South, at home and abroad, here are politicians and ordinary people,
soldiers and statesmen, abolitionists and slaveholders alike, in a rich chorus of
American opinion. The result is a masterly portrait of Lincoln the President in
the eyes of his fellow Americans.