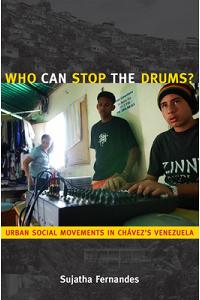 Who Can Stop the Drums?: Urban Social Movements in Chávez's Venezuela

In this vivid ethnography of social movements in the barrios, or poor shantytowns, of Caracas, Sujatha Fernandes reveals a significant dimension of political life in Venezuela since President Hugo Ch vez was elected. Fernandes traces the histories of the barrios, from the guerrilla insurgency, movements against displacement, and cultural resistance of the 1960s and 1970s, through the debt crisis of the early 1980s and the neoliberal reforms that followed, to the Ch vez period. She weaves barrio residents' life stories into her account of movements for social and economic justice. Who Can Stop the Drums? demonstrates that the transformations under way in Venezuela are shaped by negotiations between the Ch vez government and social movements with their own forms of historical memory, local organization, and consciousness.

Fernandes portrays everyday life and politics in the shantytowns of Caracas through accounts of community-based radio, barrio assemblies, and popular fiestas, and the many interviews she conducted with activists and government officials. Most of the barrio activists she presents are Ch vez supporters. They see the leftist president as someone who understands their precarious lives and has made important changes to the state system to redistribute resources. Yet they must balance receiving state resources, which are necessary to fund their community-based projects, with their desire to retain a sense of agency. Fernandes locates the struggles of the urban poor within Venezuela's transition from neoliberalism to what she calls "post-neoliberalism." She contends that in contemporary Venezuela we find a hybrid state; while Ch vez is actively challenging neoliberalism, the state remains subject to the constraints and logics of global capital.