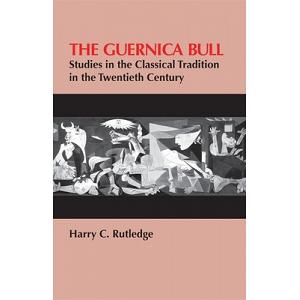 The Guernica Bull: Studies in the Classical Tradition in the Twentieth Century

In The Guernica Bull, Harry C. Rutledge examines the use of classical motifs in twentieth-century literature, art, and drama. From the echoes of Plato's dialogues at the heart of Thomas Mann's Death in Venice to the retelling of the story of Harmodius and Aristogiton--a story with grim parallels to Nazi Germany--in Marguerite Yourcenar's Lena, these modern works are a testament to both the creativity of modern artists and the versatility and timelessness of classical themes.Rutledge finds the ideal meshing of classical images and modern sensibility in Pablo Picasso's Guernica. The most startling classical image in the painting is the bull, a Cubist face staring out from the canvas at the viewer, unmoved by the scene of death and destruction around him. A symbol of the intense violence and disorder which has characterized this century, Picasso's Minoan bull is, at the same time, a symbol of creative potency and artistic achievement.The classical tradition in our era is, Rutledge suggests, multi-faceted, much like the Cubist paintings which view human beings as if through a prism, in all their infinite variety and beauty. The legacy of the Greeks and Romans is both stimulus and resource for modern artists, as evidenced by the meticulous historical reconstruction in Yourcenar's Memoires d'Hadrien, the recreation of an ancient setting in modern terms in Jean Cocteau's The Infernal Machine and T. S. Eliot's The Family Reunion, and the influence of classical monuments and landscapes in the poetry of Frederick Nicklaus, James Dickey, and Richard Wilbur.Modern artists have often found an affinity between themselves and the ancients. In the Greek and Roman works that, through their clarity and brevity, have transcended time and place, contemporary writers and painters perceive the essence of the infinite, which is the challenge in any artistic endeavor. Showing how some modernists have met this challenge, The Guernica Bull explores the ancient antecedents of several of the most distinctive twentieth-century masterpieces.