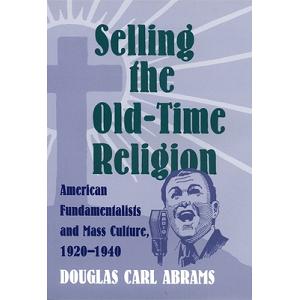 The relationship between Protestant fundamentalists and mass culture is often considered complex and ambiguous. Selling the Old-Time Religion examines this relationship and shows how the first generation of fundamentalists embraced the modern business and entertainment techniques of marketing, advertising, drama, film, radio, and publishing to spread the gospel. Selectively, and with more sophistication than has been accorded to them, fundamentalists adapted to the consumer society and popular culture with the accompanying values of materialism and immediate gratification, despite the seeming conflict between these values and certain tenets of their religious beliefs.

Selling the Old-Time Religion is written by a fundamentalist who is based at the country's foremost fundamentalist institute of higher education. It is a candid and remarkable piece of scholarship that reveals from the inside the movement's first encounters with some of the media methods it now wields with well-documented virtuosity.

Carl Abrams draws extensively on sermons, popular journals, and educational archives to reveal the attitudes and actions of the fundamental leadership and the laity. Abrams discusses how fundamentalists' outlook toward contemporary trends and events shifted from aloofness to engagement as they moved inward from the margins of American culture and began to weigh in on the day's issues--from jazz to "flappers"--in large numbers.

Fundamentalists in the 1920s and 1930s "were willing to compromise certain traditions that defined the movement, such as premillennialism, holiness, and defense of the faith," Abrams concludes, "but their flexibility with forms of consumption and pleasure strengthened their evangelistic emphasis, perhaps the movement's core." Contrary to the myth of fundamentalism's demise after the Scopes Trial, the movement's uses of mass culture help explain their success in the decades following it. In the end fundamentalists imitated mass culture not to be like the world but to evangelize it.