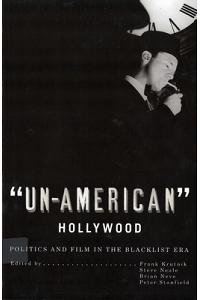 'un-American' Hollywood: Politics and Film in the Blacklist Era

The concept of "un-Americanism," so vital to the HUAC crusade of the 1940s and 1950s, was resoundingly revived in the emotional rhetoric that followed the September 11th terrorist attacks. Today's political and cultural climate makes it more crucial than ever to come to terms with the consequences of this earlier period of repression and with the contested claims of Americanism that it generated.

"Un-American" Hollywood reopens the intense critical debate on the blacklist era and on the aesthetic and political work of the Hollywood Left. In a series of fresh case studies focusing on contexts of production and reception, the contributors offer exciting and original perspectives on the role of progressive politics within a capitalist media industry.

Original essays scrutinize the work of individual practitioners, such as Robert Rossen, Joseph Losey, Jules Dassin, and Edward Dmytryk, and examine key films, including The Robe, Christ in Concrete, The House I Live In, The Lawless, The Naked City, The Prowler, Body and Soul, and FTA.