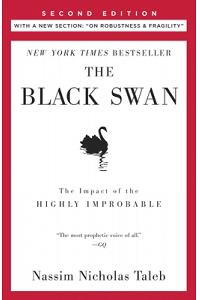 The Black Swan: Second Edition: The Impact of the Highly Improbable: With a New Section: On Robustness and Fragility

Book Description
The Black Swan is a standalone book in Nassim Nicholas Taleb's landmark Incerto series, an investigation of opacity, luck, uncertainty, probability, human error, risk, and decision-making in a world we don't understand. The other books in the series are Fooled by Randomness, Antifragile, and The Bed of Procrustes. A black swan is a highly improbable event with three principal characteristics: It is unpredictable; it carries a massive impact; and, after the fact, we concoct an explanation that makes it appear less random, and more predictable, than it was. The astonishing success of Google was a black swan; so was 9/11. For Nassim Nicholas Taleb, black swans underlie almost everything about our world, from the rise of religions to events in our own personal lives. Why do we not acknowledge the phenomenon of black swans until after they occur? Part of the answer, according to Taleb, is that humans are hardwired to learn specifics when they should be focused on generalities. We concentrate on things we already know and time and time again fail to take into consideration what we don't know. We are, therefore, unable to truly estimate opportunities, too vulnerable to the impulse to simplify, narrate, and categorize, and not open enough to rewarding those who can imagine the "impossible." For years, Taleb has studied how we fool ourselves into thinking we know more than we actually do. We restrict our thinking to the irrelevant and inconsequential, while large events continue to surprise us and shape our world. In this revelatory book, Taleb explains everything we know about what we don't know, and this second edition features a new philosophical and empirical essay, "On Robustness and Fragility," which offers tools to navigate and exploit a Black Swan world. Elegant, startling, and universal in its applications, The Black Swan will change the way you look at the world. Taleb is a vastly entertaining writer, with wit, irreverence, and unusual stories to tell. He has a polymathic command of subjects ranging from cognitive science to business to probability theory. The Black Swan is a landmark book--itself a black swan. Praise for Nassim Nicholas Taleb

"The most prophetic voice of all."--GQ

Praise for The Black Swan " A book] that altered modern thinking."--The Times (London) "A masterpiece."--Chris Anderson, editor in chief of Wired, author of The Long Tail

"The Black Swan changed my view of how the world works."--Daniel Kahneman, Nobel laureate " Taleb writes] in a style that owes as much to Stephen Colbert as it does to Michel de Montaigne. . . . We eagerly romp with him through the follies of confirmation bias and] narrative fallacy."--The Wall Street Journal

"Engaging . . . The Black Swan has appealing cheek and admirable ambition."--The New York Times Book Review From the Hardcover edition.
Annotation
A black swan is an event, positive or negative, that is deemed improbable yetcauses massive consequences. In this groundbreaking and prophetic book, Talebshows in a playful way that black swan events explain almost everything aboutour world.

Nicholas Nassim Taleb gets a lot of bad reputation these days (mainly due to his political views), but there is something to be gained from this book. Idea such as Black Swan, Tail risk blindness have become ubiquitous (and interestingly enough, makes it less likely to happen). So why not read the book that started it all?

This book is a lot of mathematical models that you can skim by reading the first sentence in a meandering paragraph(seriously, NNT takes 50 sentence to back up each argument he is making). But the strength of the book is not the models or the originality of it but rather the comedic (and ironic) explanation he has written for us. Every hypothesis always stems from a anecdote that either he experienced or that someone else he knows experienced.