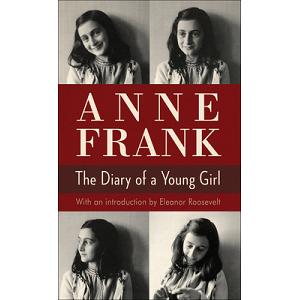 The Diary of a Young Girl

Discovered in the attic in which she spent the last years of her life, Anne Frank's remarkable diary has since become a world classic -- a powerful reminder of the horrors of war and an eloquent testament to the human spirit. In 1942, with Nazis occupying Holland, a thirteen-year-old Jewish girl and her family fled their home in Amsterdam and went into hiding. For the next two years, until their whereabouts were betrayed to the Gestapo, they and another family lived cloistered in the " Secret Annex" of an old office building. Cut off from the outside world, they faced hunger, boredom, the constant cruelties of living in confined quarters, and the ever-present threat of discovery and death. In her diary Anne Frank recorded vivid impressions of her experiences during this period. By turns thoughtful, moving, and amusing, her account offers a fascinating commentary on human courage and frailty and a compelling self-portrait of a sensitive and spirited young woman whose promise was tragically cut short.

Between 4−5 stars rating, 08 March 2013
The Most Touching Story About the Holocaust
By: Rinoa JUSUF

We all have heard the story of the holocaust.  Millions of Jews killed by Hitler and The Nazi during World War II and those who survived were liberated by the Allied Force.  But this diary provides the most personal account of what it was like to be a Jew in a Nazi-occupied country.  Anne Frank, who had just turned 13 when she first wrote the diary, was forced into hiding when her family was on the Gestapo's (Nazi Secret Police) list of people to be captured.  The diary tells the depressing story of isolation and constant fear of being discovered.  The living condition of the hiding place is described in details and finally any hope of... See More

going back into the normal life was dashed when their secret hideout was discovered.

Only Anne Frank's father survived the concentration camps and he published Anne's diary for the world to see.  It is the best written text on the holocaust.  It's very innocent and personal that every reader is sucked into their environment.  It is a must read in history classes all across the world and it is recommended for anyone who has an interest in history or in humanity in general.