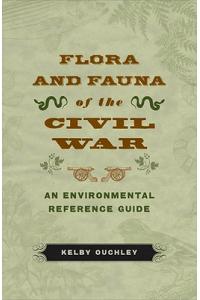 Flora and Fauna of the Civil War: An Environmental Reference Guide

During the Civil War, humans impacted plants and animals on an unprecedented scale as soldiers on both sides waged the most environmentally destructive war ever on American soil. Refugees and armies alike tramped across the landscape foraging for food, shelter, and fuel. Wild plants and animals formed barriers for armies and carried disease, yet also provided medicine and raw materials necessary to implement war, greatly influencing the day-to-day life of soldiers and civilians. Of the thousands of books written about the Civil War, few mention the environment, and none address the topic as a principal theme. In Flora and Fauna of the Civil War, Kelby Ouchley blends traditional and natural history to create a unique text that explores both the impact of the Civil War on the surrounding environment and the reciprocal influence of plants and animals on the war effort.

The war generated an abundance of letters, diaries, and journals in which soldiers and civilians penned descriptions of plants and animals, sometimes as a brief comment in passing and other times as part of a noteworthy event in their lives. Ouchley collects and organizes these first-person accounts of the Civil War environment, adding expert analysis and commentary in order to offer an array of fascinating insights on the natural history of the era.

After discussing the physical setting of the war and exploring humans' attitudes toward nature during the Civil War period, Ouchley presents the flora and fauna by individual species or closely related group in the words of the participants themselves. From ash trees to willows, from alligators to white-tailed deer, the excerpts provide glimpses of personal encounters with the natural world during the war, revealing how soldiers and civilians thought about and interacted with wild flora and fauna in a time of epic historical events.

Collectively, no better sources exist to reveal human attitudes toward the environment in the Civil War era. This one-of-a-kind reference book will spark widespread interest among Civil War scholars, writers, and enthusiasts, as well as environmental historians.