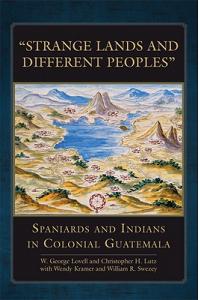 Guatemala emerged from the clash between Spanish invaders and Maya cultures that began five centuries ago. The conquest of these "rich and strange lands," as Hern n Cort s called them, and their "many different peoples" was brutal and prolonged. "Strange Lands and Different Peoples" examines the myriad ramifications of Spanish intrusion, especially Maya resistance to it and the changes that took place in native life because of it. The studies assembled here, focusing on the first century of colonial rule (1524-1624), discuss issues of conquest and resistance, settlement and colonization, labor and tribute, and Maya survival in the wake of Spanish invasion. The authors reappraise the complex relationship between Spaniards and Indians, which was marked from the outset by mutual feelings of resentment and mistrust. While acknowledging the pivotal role of native agency, the authors also document the excesses of Spanish exploitation and the devastating impact of epidemic disease. Drawing on research findings in Spanish and Guatemalan archives, they offer fresh insight into the Kaqchikel Maya uprising of 1524, showing that despite strategic resistance, colonization imposed a burden on the indigenous population more onerous than previously thought. Guatemala remains a deeply divided and unjust society, a country whose current condition can be understood only in light of the colonial experiences that forged it. Affording readers a critical perspective on how Guatemala came to be, "Strange Lands and Different Peoples" shows the events of the past to have enduring contemporary relevance.