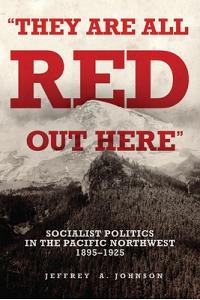 One of early-twentieth-century America's most fertile grounds for political radicalism, the Pacific Northwest produced some of the most dedicated and successful socialists the country has ever seen. As a radicalized labor force emerged in mining, logging, and other extractive industries, socialists employed intensive organizational and logistical skills to become an almost permanent third party that won elections and shook the confidence of establishment rivals. At the height of Socialist Party influence just before World War I, a Montana member declared, "They are all red out here."

In this first book to fully examine the development of the American Socialist Party in the Northwest, Jeffrey A. Johnson draws a sharp picture of one of the most vigorous left-wing organizations of this era. Relying on party newspapers, pamphlets, and correspondence, he allows socialists to reveal their own strategies as they pursued their agendas in Washington, Oregon, Idaho, and Montana. And he explores how the party gained sizable support in Butte, Spokane, and other cities seldom associated today with left-wing radicalism.

"They Are All Red Out Here" employs recent approaches to labor history by restoring rank-and-file workers and party organizers as active participants in shaping local history. The book marks a major contribution to the ongoing debate over why socialism never grew deep roots in American soil and no longer thrives here. It is a work of political and labor history that uncovers alternative social and political visions in the American West.