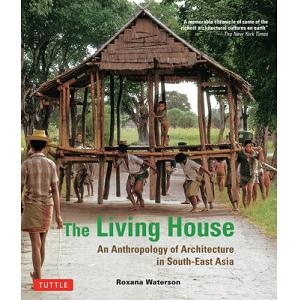 -17%
The cover image may be different.

Living House: An Anthropology of Architecture in South-East Asia

The Living House is a pioneering work by respected anthropologist Roxana Waterson that has become a classic in its field. It is first book of its kind to present a detailed picture of houses within the complex social and symbolic fabric of indigenous South-East Asian peoples. The main focus of the book is on Indonesia, but in tracing historical links between architectural forms across the region, it reveals a much wider field of inquiry--covering all of the Austronesian peoples and cultures extending as far afield as Madagascar, Japan and the Pacific islands to New Zealand and Hawaii. As it probes the centrally significant role of houses within South-East Asian social systems, The Living House reveals new insights into the kinship systems, gender symbolism and cosmological principles of the peoples who build them, ultimately uncovering fundamental themes concerning the concepts of life force and life processes inherent in all of these cultures. A vivid picture is produced of how people shape buildings and buildings shape people--how rules about layout and spatial usage impact social relationships. The book concludes with a consideration of present-day changes affecting the fates of indigenous cultures and architectures throughout the region. This book will be of tremendous interest to architects and historians, and anyone interested in the indigenous art and cultures of South-East Asia.