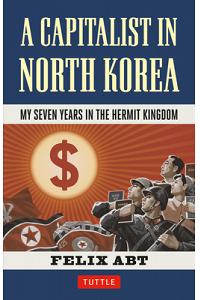 Capitalist in North Korea: My Seven Years in the Hermit Kingdom

Business in North Korea: a paradoxical and fascinating situation is interpreted by a true insider. In 2002, the Swiss power company ABB appointed Felix Abt its country director for North Korea. The Swiss Entrepreneur lived and worked in North Korea for seven years, one of the few foreign businessmen there. After the experience, Abt felt compelled to write A Capitalist in North Korea to describe the multifaceted society he encountered. North Korea, at the time, was heavily sanctioned by the UN, which made it extremely difficult to do business. Yet, he discovered that it was a place where plastic surgery and South Korean TV dramas were wildly popular and where he rarely needed to walk more than a block to grab a quick hamburger. He was closely monitored, and once faced accusations of spying, yet he learned that young North Koreans are hopeful--signing up for business courses in anticipation of a brighter, more open, future. In A Capitalist in North Korea, Abt shares these and many other unusual facts and insights about one of the world's most secretive nations.

This books shows us how really north korea works from the eye of Felix ABT, really changing my mindset about this so called "Hermit" Kingdom.

Between 4−5 stars rating,  14 November 2014
A Capitalist in North Korea: My Seven Years in the Hermit Kingdom
By: Professor Lloyd Pettiford, Nottingham Trent University

Most notably the book offers at all times a profound commitment to the people of North Korea, essentially arguing that engagement and ideas are the only way to help this country, which would nicely sidestep the need for millions of deaths, billions of military spending and trillions of rebuilding costs which could happen in the case of war, made more likely by the sabre rattling and hitting with sticks which the United States is particularly keen to do.

Between 4−5 stars rating,  14 November 2014
A Capitalist in North Korea: My Seven Years in the Hermit Kingdom
By: Leonid Petrov, lecturer in Korean Studies

Felix Abt prefers to stay apolitical and impartial when sharing his thoughts and memories of the seven-year sojourn. From the book we can see that he loves Korea and cares about its people. In his assessments of North Korea's past and present the author approaches all issues from a human (and humanistic) perspective, trying to show life in the country without political or ideological coloring.

Between 3−4 stars rating,  14 November 2014
A Capitalist in North Korea: My Seven Years in the Hermit Kingdom
By: Bradley K. Martin

Very few Westerners can match Felix Abt's depth of hands-on business experience in North Korea. Not only similarly adventurous would-be investors and traders in the 'Hermit Kingdom' but also members of my own fraternity of Pyongyang-watchers will want to peruse his useful new book for the otherwise unavailable details and unique insights it provides. Don't look for apologies here.

Between 4−5 stars rating,  14 November 2014
A Capitalist in North Korea: My Seven Years in the Hermit Kingdom
By: Roger Cavazos, Associate, The Nautilus Institute

No one has [Felix Abt's] credentials: seven years of unparalleled access to most levels of North Koreans in the central government and seven of nine provinces, founder of a Pyongyang Business School and first President of the Pyongyang European Business Association. This “capitalist” attacks conventional wisdom on North Korea; sometimes with blunt force, sometimes with nuance, but always with a businessman’s eye and always with a fiery, humor-tempered wit. Indeed, the personal pictures and lively pace of the book combine the feel of a fireside chat with facts one expects from a businessman.