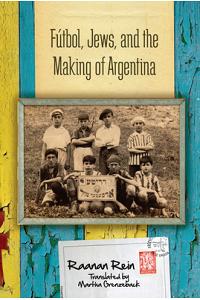 Fútbol, Jews, and the Making of Argentina

If you attend a soccer match in Buenos Aires of the local Atlanta Athletic Club, you will likely hear the rival teams chanting anti-Semitic slogans. This is because the neighborhood of Villa Crespo has long been considered a Jewish district, and its soccer team, Club Atl tico Atlanta, has served as an avenue of integration into Argentine culture. Through the lens of this neighborhood institution, Raanan Rein offers an absorbing social history of Jews in Latin America. Since the Second World War, there has been a conspicuous Jewish presence among the fans, administrators and presidents of the Atlanta soccer club. For the first immigrant generation, belonging to this club was a way of becoming Argentines. For the next generation, it was a way of maintaining ethnic Jewish identity. Now, it is nothing less than family tradition for third generation Jewish Argentines to support Atlanta. The soccer club has also constituted one of the few spaces where both Jews and non-Jews, affiliated Jews and non-affiliated Jews, Zionists and non-Zionists, have interacted. The result has been an active shaping of the local culture by Jewish Latin Americans to their own purposes. Offering a rare window into the rich culture of everyday life in the city of Buenos Aires created by Jewish immigrants and their descendants, F tbol, Jews, and the Making of Argentina represents a pioneering study of the intersection between soccer, ethnicity, and identity in Latin America and makes a major contribution to Jewish History, Latin American History, and Sports History.