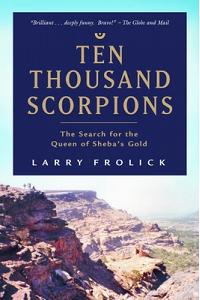 Ten Thousand Scorpions: The Search for the Queen of Sheba's Gold

Or   602 PEC Points
Currently Unavailable
If stock becomes available, email me at:

The desert tribes of Yemen call her Bilqis. In the high plateaus of Ethiopia, she is revered as Makeda. And in the fertile valleys of Anatolian Turkey, she is known as Saba Sultana. Who was the mysterious Queen of Sheba, and why has her legend survived for three thousand years - not least in accounts from both the Bible and the Koran? In 1996, a geology team working for Chuck Fipke (the immensely colourful discoverer of the Etaki diamond mines in the Northwest Territories and the subject of the bestselling 1999 biography Fire into Ice) was looking for gold deposits in the remote Yemeni desert. There they stumbled upon ancient mine tunnels. Were these primitive Iron Age ruins the source of Sheba's gold? Author Larry Frolick travelled with Fipke's Cantex crew into the desert, seeking the truth of the legendary Queen. What he found there were not answers but more questions - questions that ultimately led him from Yemen to the Highlands of Ethiopia during Lent to Anatolian Turkey, where the ruins of the great city of Ephesus now lie inland, beside fields that were once an ancient harbour...and finally deep into the heart of Sheba's mystery. Along the way, the author meets a vast array of travellers, madmen, and visionaries - a Japanese social worker, who specializes in the treatment of students who stab their teachers; a Welshman fleeing perfect love; the last director of the Back-to-Africa Movement; perverse German trekkers; white Rastas; punk missionaries; and Turkish "beats" - pilgrims all. Their vivid stories create a surreal backdrop to Frolick's search for "the epical Queen."