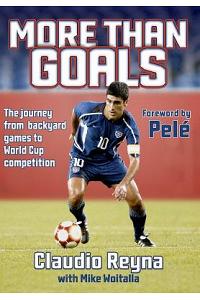 More Than Goals: The Journey from Backyard Games to World Cup Competition

Experience the sport of soccer like never before "More Than Goals" will take you inside each level of competition and development of the most successful U.S. men's soccer player ever.

Coaches, teammates, and opponents recognize that Reyna's value on the field and to a squad extends far beyond the goal-scoring situations he creates. More Than Goals captures the consummate leader and captain's passion and knowledge for the game. You'll gain both an appreciation of what it takes to excel in the sport and insights on how to play it.

Author Claudio Reyna has been a champion performer from youth club through professional levels. The following are among his accomplishments:

-Captain of teams in top professional leagues in Germany, Scotland, and England Reyna is currently with Manchester City of the English Premier League and is also the U.S. national team captain.

Annotation
Experience the sport of soccer like never before with this guide that takes readers inside each level of competition and development of the most successful U.S. men's soccer player ever.