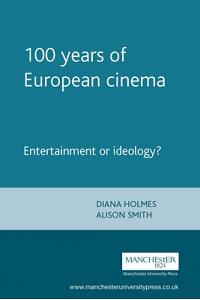 Publication Date: 07 March 2001
Cinema provides entertainment, but it also, inevitably, communicates a set of values, a vision of the world or an ideology. From its beginnings more than a century ago, European cinema has dealt in a variety of ways with the tension between these two functions: at the extremes, dictatorial regimes have sweetened the pill of ideology with the sugar of entertainment. Meanwhile, spectators have persisted in seeking out, above all, the pleasure film can provide. This book explores the complex relationship between entertainment, ideology and audiences in European film, through studies that range from the Stalinist musicals of the 1930s, to cinematic representations of masculinity under Franco, to recent French films and their Hollywood remakes. Diverse and entertaining, 100 years of European cinema is addressed to students of film - especially French, German, Russian or Spanish - and to those readers and academics interested in both the history of cinema and in European culture. Contributors include; Richard Taylor, Rosemary Scott, Daniela Berghahn, Andea Rinke, Peter Hames, Peter William Evans, Parvati Nair, Steve Cannon, Eliane Meyer, Stefan Wolff, David Gillespie, Wendy Everatt, Julia Dobson and Peter Kramer.