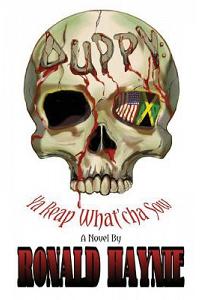 "duppy: Ya Reap What'cha Sow" The Conscience Can Kill

Or   948 PEC Points
In Stock
If stock becomes available, email me at:

Do Unto Others As They Do Unto You Because The Conscience Can Kill Dwayne "Baby Al" Carter is moving on with life, and is finally drug free after the tragic death of his only relative, his grandfather Albert Carter. There is the plush, new co-op apartment on the west side of the Bronx, the brand new job with the New York City Transit Authority, a sizzling relationship with his counselor Nicole, the friendship with his buddy of Jamaican descent Patrick Livingston is stronger than ever, and most of all, there is a huge amount of insurance money left over from his grandfather's death. The violent past is troubled waters under the bridge Dwayne hopes and believes for his future, until the strange happenings begin. The mysterious nosebleed with nightmares, voices and rearranged furniture, with an unseen dog growling and barking nightly. Then there is the familiar, elderly subway passenger following Dwayne daily, but why? Physical abuse begins as the stalking visions continue: why? Dwayne suspects ghosts, or is it a duppy? Patrick is summoned to help his friend deal with a speeding. descent into a new private hell. If only he can obtain information about duppies from his Jamaican reared grandmother Una Livingston in time to aid Dwayne's fight against universal law and the debt of retribution. Payment is officially due for Dwayne proving what goes around, comes around. You reap what you sow. Do unto others as they do unto you, because the conscience can kill Influenced by the macabre and gore of Stephen King & William Peter Blatty ("The Exorcist"), the literary speed and brilliance of Richard Wright ("Native Son"), the dark, domestic conflict of Henry Farrell ("Whatever Happened To Baby Jane"), the gritty streetlife influence of Donald Goines ("Dopefiend"/"Whoreson"/"Crime Partners"), with the resilient courage of Zora Neale Hurston ("Their Eyes Were Watching God") via elusive dialects, "DUPPY: Ya Reap What'cha Sow" examines life in the New York City ghettos during the late twentieth century with its not so friendly yesterdays. Pinpointing supernatural folklore with intercultural racism, the novel also serves a powerfully graphic portrait of teenage drug & elderly abuse at the height of the 1980's turbulent crack-cocaine era.