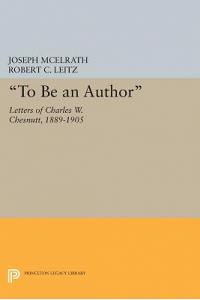 Collected in this volume are the 1889--1905 letters of one of the first African-American literary artists to cross the "color line" into the de facto segregated American publishing industry of the turn of the century. Selected for inclusion are those chronicling the rise of Charles W. Chesnutt (1858-1932), an attorney and businessman in Cleveland, Ohio, who achieved prominence as a novelist, short story writer, essayist, and lecturer despite the obstacles faced by a man of color during the "Jim Crow" period. In his insightful commentaries on his own situation, Chesnutt provides as well a special perspective on life-at-large in America during the Gilded Age, the "gay 90s" (which were not so gay for African Americans), and the Progressive era. Like his black correspondents--Booker T. Washington, W.E.B. Du Bois, T. Thomas Fortune, and William M. Trotter--he was one of the major commentators on what was then termed the "Negro Problem." His most distinguished novels, The House Behind the Cedars (1900) and The Marrow of Tradition (1901), were published by major "white" presses of the time; not only did his editors and publishers but then-preeminent black and white critics greet these literary protests against racism as proof of the intellectual and artistic excellence of which a long-oppressed people were capable when afforded equal opportunity.

Since the 1960s, when the rediscovery of his genius began in earnest, Chesnutt has received even more recognition than he enjoyed by the early 1900s. Joseph R. McElrath, Jr., and Robert C. Leitz, III, have surveyed every collection of Chesnutt's papers and those of his correspondents in order to reconstruct the story of his most vital years as an author. Their introduction contextualizes the letters in light of Chesnutt biography and the less-than-promising prospects faced by a would-be literary artist of his racial background. Their encyclopedic annotations explaining contemporary events to which Chesnutt responds and what was then transpiring in both black and white cultural environments illuminate not only Chesnutt's character but those of many now unfamiliar figures who also contributed to what Chesnutt termed the "cause." Provided in this first-ever edition of Chesnutt's letters is a detailed portrait of one of the pioneers in the African-American literary tradition and a panorama of American life a century ago.

The Princeton Legacy Library uses the latest print-on-demand technology to again make available previously out-of-print books from the distinguished backlist of Princeton University Press. These editions preserve the original texts of these important books while presenting them in durable paperback and hardcover editions. The goal of the Princeton Legacy Library is to vastly increase access to the rich scholarly heritage found in the thousands of books published by Princeton University Press since its founding in 1905.