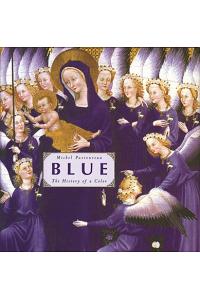 Blue: The History of a Color

Blue has had a long and topsy-turvy history in the Western world. The ancient Greeks scorned it as ugly and barbaric, but most Americans and Europeans now cite it as their favorite color. In this fascinating history, the renowned medievalist Michel Pastoureau traces the changing meanings of blue from its rare appearance in prehistoric art to its international ubiquity today.

Any history of color is, above all, a social history. Pastoureau investigates how the ever-changing role of blue in society has been reflected in manuscripts, stained glass, heraldry, clothing, paintings, and popular culture. Beginning with the almost total absence of blue from ancient Western art and language, the story moves to medieval Europe. As people began to associate blue with the Virgin Mary, the color became a powerful element in church decoration and symbolism. Blue gained new favor as a royal color in the twelfth century and became a formidable political and military force during the French Revolution. As blue triumphed in the modern era, new shades were created and blue became the color of romance and the blues. Finally, Pastoureau follows blue into contemporary times, when military clothing gave way to the everyday uniform of blue jeans and blue became the universal and unifying color of the Earth as seen from space.

Beautifully illustrated, Blue tells the intriguing story of our favorite color and the cultures that have hated it, loved it, and made it essential to some of our greatest works of art.