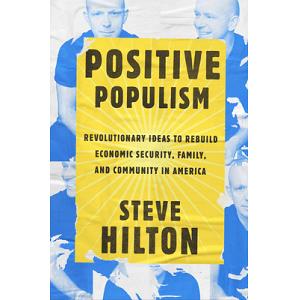 The elites still can't believe Donald Trump won or that Britain voted for Brexit. But what's next for the populist revolution and for the people who believe in it? Fox News host and former government insider Steve Hilton shows how populism can be a positive force for improving lives, with revolutionary ideas to restore the economic security that working Americans once took for granted, and rebuild the ties of family, community and nation that have been ripped apart by decades of policies that favored big government, big business, and the powerful. Recounting his own journey from immigrant roots to the heart of power - and his deeply personal battles with the permanent bureaucracy once there - Hilton vividly describes the scale of change that's needed if the true promise of the populist revolution is to be delivered, including: - An unprecedented assault on centralized government and the administrative state to make sure "Drain The Swamp" is not just a slogan
- A completely fresh approach to jobs, schools and skills so every working American can live on what they earn
- Practical steps to reverse the disaster of family breakdown so that every child can be raised in a stable, loving home
- Ideas to revitalize our communities by giving citizens real control Whether by challenging the excess power of corporations in our economy or the corrupt influence of donors and lobbyists in our government, the ideas in this book echo the intent of America's founders by taking power from the ruling class and putting it in the hands of the people. For too long, populism has been defined by those who despise it. By focusing on what populism is for, and not just what it's against, Hilton provides a coherent philosophy and practical blueprint for how the movement can have an impact beyond one election cycle, and in people's everyday lives. That's Positive Populism.