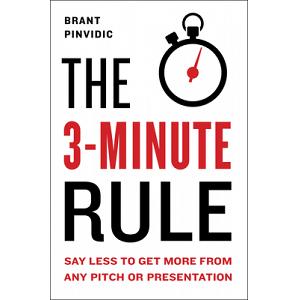 -16%
The cover image may be different.

The 3-Minute Rule: Say Less to Get More from Any Pitch or Presentation

A Hollywood pitch master spills his bag of pitching tricks to show you how to turn any proposition into an effective, compelling, 3-minute pitch. Most people assume a good pitch is a flashy, elaborate affair with dozens of talking points and beautiful slides that needs to be at least 20 minutes long. Brant Pinvidic says that's absolutely untrue: all you need to be taken seriously is three minutes. Brant is one of the most successful producers in Hollywood, having sold more than 300 TV and movie projects. From Bar Rescue to The Biggest Loser, he has convinced risk-averse studios to turn over their money for his ideas - not by using his charm (though he is pretty charming), or by calling his ideas the greatest things since sliced bread (though they are pretty great). Instead, he uses a simple, straightforward system called the WHAC method to boil any idea down to its most essential components, and structure it for maximum impact. By answering the questions: "What is it? How does it work? Are you sure? Can you do it?" you can weave your most crucial points into a compelling narrative structure and use the power of storytelling in any setting and at any level. It's a method that's helped Brant sell each of his projects in no more than 3 minutes. But it's not just good for pitching Hollywood Brant shows you how the same method has helped everyone from Fortune 100 CEOs to PTA presidents. It's helped plumbers sell home restoration systems, lawyers win cases, and oil drillers sell stock, and it's going to help you, too.