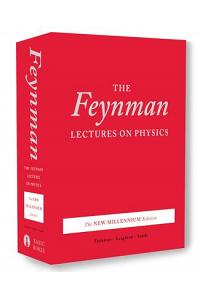 The Feynman Lectures on Physics Set

The legendary introduction to physics from the subject's greatest teacher
"The whole thing was basically an experiment," Richard Feynman said late in his career, looking back on the origins of his lectures. The experiment turned out to be hugely successful, spawning a book that has remained a definitive introduction to physics for decades. Ranging from the most basic principles of Newtonian physics through such formidable theories as general relativity and quantum mechanics, Feynman's lectures stand as a monument of clear exposition and deep insight. Now, we are reintroducing the printed books to the trade, fully corrected, for the first time ever, and in collaboration with Caltech. Timeless and collectible, the lectures are essential reading, not just for students of physics but for anyone seeking an introduction to the field from the inimitable Feynman.

Between 3−4 stars rating,  18 October 2017
The intuitive physics
By: Matthew Nikholai

This is a collection of the late Richard Feynman's physics lectures which mainly deals with the 'intuitive' part of making sense of physics. Due to the 'intuitive' nature of this series, it is ideally used after studying the required mathematical and physical background in university. The downside to this masterpiece is only the price.