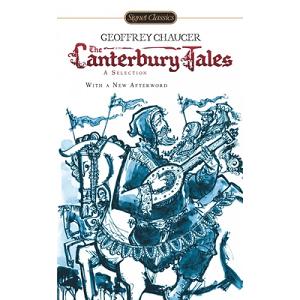 The Canterbury Tales: A Selection

While Geoffrey Chaucer composed several magnificent works of poetry, his reputation as "the father of English literature" rests mainly on The Canterbury Tales, a group of stories told by assorted pilgrims en route to the shrine of Thomas à Becket in Canterbury Cathedral. From the mirthful and bawdy to the profoundly moral, the tales, taken in their entirety, reflect not only the manners and mores of medieval England, but indeed, the full comic and tragic dimensions of the human condition. Considered the greatest collection of narrative poems in English literature, The Canterbury Tales was composed in the Middle English of Chaucer's day, possibly to be read aloud at the court of Richard II. However, their grandeur, humor, and relevance are timeless, as readers of this authoritative edition will discover. UNIQUE FEATURES OF THE SIGNET CLASSICS CANTERBURY TALES Full critical Introduction by editor Donald R. Howard * Normalized spelling system for easier reading and pronunciation * Extensive footnotes
* Special section "On Pronouncing Chaucer" * Glossary of basic Middle English words With a Foreword by Frank Grady and a New Afterword by Paul Strohm