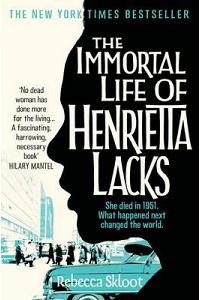 The Immortal Life of Henrietta Lacks :

This story has become almost an urban legend, that every cell line used in medical testing around the world comes from a single person that was unaware that his/her cell line is used in these experiments. This is a heartbreaking story of the woman behind the cell line, the indignities she and her families suffered and ultimately the importance of her legacy to the world.

I must say that in reading this book, I am deeply disturbed by the utilitarian argument presented by medical researcher that uses her cell line, when even Henrietta’s family can’t afford medical insurance. At the end of the day, the question raised is not just one of moral integrity, but also medical and racial relation ethics.

Nicholas Nassim Taleb gets a lot of bad reputation these days (mainly due to his political views), but there is something to be gained from this book. Idea such as Black Swan, Tail risk blindness have become ubiquitous (and interestingly enough, makes it less likely to happen). So why not read the book that started it all?

This book is a lot of mathematical models that you can skim by reading the first sentence in a meandering paragraph(seriously, NNT takes 50 sentence to back up each argument he is making). But the strength of the book is not the models or the originality of it but rather the comedic (and ironic) explanation he has written for us. Every hypothesis always stems from a anecdote that either he experienced or that someone else he knows experienced.