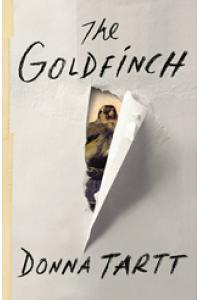 The author of the classic bestsellers The Secret History and The Little Friend returns with a brilliant, highly anticipated new novel.

Composed with the skills of a master, The Goldfinch is a haunted odyssey through present day America and a drama of enthralling force and acuity.

It begins with a boy. Theo Decker, a thirteen-year-old New Yorker, miraculously survives an accident that kills his mother. Abandoned by his father, Theo is taken in by the family of a wealthy friend. Bewildered by his strange new home on Park Avenue, disturbed by schoolmates who don't know how to talk to him, and tormented above all by his unbearable longing for his mother, he clings to one thing that reminds him of her: a small, mysteriously captivating painting that ultimately draws Theo into the underworld of art.

As an adult, Theo moves silkily between the drawing rooms of the rich and the dusty labyrinth of an antiques store where he works. He is alienated and in love-and at the center of a narrowing, ever more dangerous circle.

The Goldfinch is a novel of shocking narrative energy and power. It combines unforgettably vivid characters, mesmerizing language, and breathtaking suspense, while plumbing with a philosopher's calm the deepest mysteries of love, identity, and art. It is a beautiful, stay-up-all-night and tell-all-your-friends triumph, an old-fashioned story of loss and obsession, survival and self-invention, and the ruthless machinations of fate.

There is some kind production defect. The top paper pages in the middle wasn't cut well or been cut in different size. We still can read the book well, but if its kind of export product from the origin country, they shouldn't let it pass.

Between 3−4 stars rating,  05 June 2018
Who am I to review a Pulitzer winning novel? This is already highly acclaimed book
By: Antonius B.

I thought the writing was very good, descriptive and moved the story along until the last third or so of the book. This was the place where I began to read rapidly through wordy passages that from my view didn't add anything at this point, but I’d still read it because I want to know what happens to these characters.

The characters are so well-drawn, reading this is like watching a film. It was so vivid, I went to sleep and my dreams literally continued it on. There are flaws, overwrought sentences, the ending (which has garnered a lot of criticism).

My view is that you shouldn’t read reviews beforehand but rather read the first few chapter and drop the book if you don’t like it.

Between 4−5 stars rating,  30 January 2018
Another magnitude of Donna Tartt's brilliance.
By: Allathifah Desnia

Somehow, throughout the book, you were silently being lured to be attached to Theo's feeling emotionally, that every pain, every blush, every emotion stirred in him would surge in ourselves as well. You'll be in a serious hangover when you've flipped the last page and found yourself staring at the blank page, your mind an endless maze of rubbles from every emotion built throughout the book and exploded the way the museum did when everyone's sealed fate had been wholly told.

950+ pages! and every page feels like a punch to the face. at least for me it does. i was in awe of Donna Tartt's brilliant writing the whole time i was reading this.

five stars, five thousand stars, five BILLION stars for Donna Tartt! make sure you read it before the movie comes out!!! cannot recommend it enough

0 Comments
Showing 1 to 4 of 4 (1 Pages)
Are you sure you want to delete this review?
Easy, Secure
Online Shopping