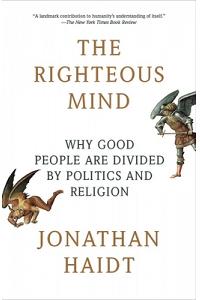 The Righteous Mind: Why Good People Are Divided by Politics and Religion

In this "landmark contribution to humanity's understanding of itself" (The New York Times Book Review) social psychologist Jonathan Haidt challenges conventional thinking about morality, politics, and religion in a way that speaks to conservatives and liberals alike.

Drawing on his twenty five years of groundbreaking research on moral psychology, Haidt shows how moral judgments arise not from reason but from gut feelings. He shows why liberals, conservatives, and libertarians have such different intuitions about right and wrong, and he shows why each side is actually right about many of its central concerns. In this subtle yet accessible book, Haidt gives you the key to understanding the miracle of human cooperation, as well as the curse of our eternal divisions and conflicts. If you're ready to trade in anger for understanding, read The Righteous Mind.
Annotation
Why can't political leaders work together as threats loom and problems mount? Why do people so readily assume the worst about the motives of their fellow citizens? Social psychologist Haidt explores the origins of divisions and points the way forward to mutual understanding.

Between 4−5 stars rating,  23 January 2020
the righteous mind
By: Adesyifa Maulida

fast shipping and the book was packed neatly.

Not until recently, the scholarship studying areas of morality was highly, if not exclusively, dominated by philosophy; that is ethics and political philosophy. Haidt, coming from an educational background as a social psychologist, has made the attempt to discuss about morality in a less "metaphysical" manner--that is to say philosophy--and having it rather grounded on a more concrete and empirical basis by supporting it with solid statistics data. Rather than contriving to explain what morality is, Haidt embarked on the task aiming to make readers understand the perceived moral landscape in the American (but conceptually not exclusively) society, and how it is so.