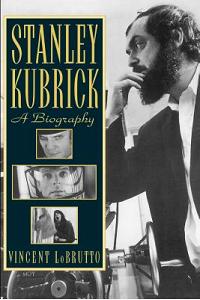 Stanley Kubrick, director of the acclaimed films Path of Glory, Spartacus, Lolita, Dr. Strangelove, 2001: Space Odyssey, A Clockwork Orange, The Shining, and Full Metal Jacket, is arguably one of the greatest American filmmakers. Yet, despite being hailed as "a giant" by Orson Welles, little is known about the reclusive director. Stanley Kubrick--the first full-length study of his life--is based on assiduous archival research as well as new interviews with friends, family, and colleagues.
Film scholar Vincent LoBrutto provides a comprehensive portrait of the director, from his high school days in the Bronx and his stint as a photographer for Look magazine, through the creation of his wide-ranging movies, including the long-awaited Eyes Wide Shut. The author provides behind-the-scenes details about writing, filming, financing, and reception of the director's entire output, paying close attention to the technical innovations and to his often contentious relationships with actors. This fascinating biography exposes the enigma that is Stanley Kubrick while placing him in context of film history.