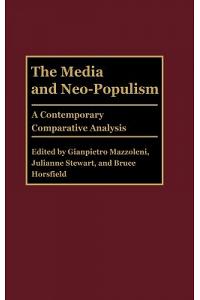 The Media and Neo-Populism: A Contemporary Comparative Analysis

Mazzoleni, Stewart, Horsfield, and their contributors analyze the two-way relationship of the mass media and the contemporary phenomenon of extreme right wing neo-populist political parties which emerged in the closing years of the 20th century across the world. The success of Jean-Marie Le Pen, leader of the neo-populist Front National, in the first French presidential ballot in April 2002 shows that these extremist parties have strong, if varying, electoral support. Drawn into reporting on the policies and antigovernment critiques of the new parties, the mass communication institutions, especially those engaged in news production, have been challenged by a variety of unconventional but effective political campaign strategies that caused many media professionals considerable challenge.

Taking an approach informed by mass communication theory, this book analyzes eight case studies of the interaction of news media dynamics and neo-populism in Austria, Australia, France, Canada, India, Italy, the United States, and the Latin American region against the background of widespread disenchantment with traditional parties and the complacency and cynicism of popularly elected governments. Insights into media responses reveal how dependent on media coverage the neo-populist parties were and how, in many cases, the media were initially unequal to the confronting ideologies of the new parties. Although the news media exploited the new parties, new parties exploited the news media as well in quite shrewd and original ways. This is an important resource for scholars, students, and other researchers involved with political mass communications and right-wing political organizations.