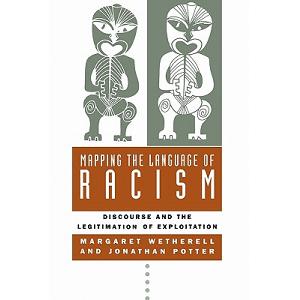 Mapping the Language of Racism: Discourse and the Legitimation of Exploitation

The topics of 'race' and 'racism' are often treated narrowly and unimaginatively in social scientific literature; they are usually viewed as sub-categories of 'stereotyping' or 'prejudice' or 'social class.' In this exciting new book, Margaret Wetherell and Jonathan Potter extend their work on the use of discourse analysis to tackle racism and issues of social structure, power relations and idology.

Part I, "Theory and Method," reviews and criticizes mainstream sociological and psychological theoretical approaches to the topic of racism and introduces the challenges to them posed by discourse analysis. Also examined are the ways in which some recent developments in literary theory, post-structuralism, semiotics and cultural studies might be applied to the social and psychological study of racist practices.

Part II, "Discourse in Action," examines how white New Zealanders make sense of their own history and actions towards the Maori minoriy. The authors' contention is that, in order to combat racism, we need to address the commonplace forms of explanation used by "ordinary" people rather than concentrate on obvious bigots and extremist groups. They conclude that many 'liberal' and 'egalitarian' arguments can be used to sustain racism and exploitation.

"Mapping the Language of Racism" is a pioneering book which suggest genuinely new ways of thinking and acting on a topic of grave social concern.