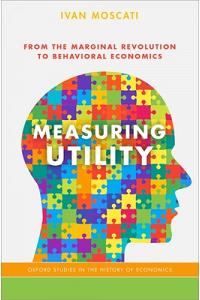 Measuring Utility: From the Marginal Revolution to Behavioral Economics

Or   2214 PEC Points
Limited Stock
If stock becomes available, email me at:

Utility is a key concept in the economics of individual decision-making. However, utility is not measurable in a straightforward way. As a result, from the very beginning there has been debates about the meaning of utility as well as how to measure it. This book is an innovative investigation of how these arguments changed over time. Measuring Utility reconstructs economists' ideas and discussions about utility measurement from 1870 to 1985, as well as their attempts to measure utility empirically. The book brings into focus the interplay between the evolution of utility analysis, economists' ideas about utility measurement, and their conception of what measurement in general means. It also explores the relationships between the history of utility measurement in economics, the history of the measurement of sensations in psychology, and the history of measurement theory in general. Finally, the book discusses some methodological problems related to utility measurement, such as the epistemological status of the utility concept and its measures. The first part covers the period 1870-1910, and discusses the issue of utility measurement in the theories of Jevons, Menger, Walras and other early utility theorists. Part II deals with the emergence of the notions of ordinal and cardinal utility during the period 1900-1945, and discusses two early attempts to give an empirical content to the notion of utility. Part III focuses on the 1945-1955 debate on utility measurement that was originated by von Neumann and Morgenstern's expected utility theory (EUT). Part IV reconstructs the experimental attempts to measure the utility of money between 1950 and 1985 within the framework provided by EUT. This historical and epistemological overview provides keen insights into current debates about rational choice theory and behavioral economics in the theory of individual decision-making and the philosophy of economics.