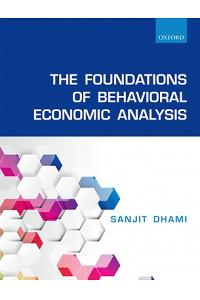 The Foundations of Behavioral Economic Analysis

This is the first definitive introduction to behavioral economics aimed at advanced undergraduate and postgraduate students. Authoritative, cutting edge, yet accessible, it guides the reader through theory and evidence, providing engaging and relevant applications throughout. It is divided into nine parts and 24 chapters:

Part I is on behavioral economics of risk, uncertainty, and ambiguity. The evidence against expected utility theory is examined, and the behavioral response is outlined; the best empirically supported theory is prospect theory.

Part II considers other-regarding preferences. The evidence from experimental games on human sociality is given, followed by models and applications of inequity aversion, intentions based reciprocity, conditional cooperation, human virtues, and social identity.

Part III is on time discounting. It considers the evidence against the exponential discounted utility model and describes several behavioral models such as hyperbolic discounting, attribute based models and the reference time theory.

Part VI studies the role of emotions; among other topics it considers projection bias, temptation preferences, happiness economics, and interaction between emotions and cognition.