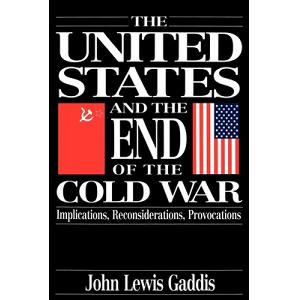 The United States and the End of the Cold War: Implications, Reconsiderations, Provocations

The Cold War ended with an exhilarating wave of events: the toppling of the Berlin Wall, the rise of the dissident poet Vaclav Havel, the revolution in Romania. Americans rejoiced at the dramatic conclusion of the long struggle. "But victories in wars--hot or cold--tend to unfocus the mind," writes John Gaddis. "It can be a dangerous thing to have achieved one's objectives, because one then has to decide what to do next." In The United States and the End of the Cold War, Gaddis provides a sharp focus on the long history of the Cold War, shedding new light on its sudden ending, as well as on what might come next.

In this provocative, insightful book, Gaddis offers a number of thoughtful essays on the history of international relations during the last half century. His reassessments of important figures and themes from the Cold War are sometimes surprising. For example, he portrays John Foster Dulles and Ronald Reagan as far more flexible and perceptive statesmen than the missile-toting caricatures depicted in editorial cartoons. And he takes a second look at the importance of espionage and intelligence in Cold War history, a field often left to buffs and spy novelists. Most important, he focuses on the central elements in superpower relations. In an eloquent account of the American style of foreign policy in the twentieth century, for instance, he explores how Americans (having learned the lesson of Adolf Hitler) consistently equated the forms of foreign governments with their external behavior, assuming that authoritarian states would be aggressive states. He also analyzes the "tectonics" of Cold War history, demonstrating how long term changes in international affairs and Soviet bloc countries built up pressures that led to the sudden earthquakes of 1989. And along the way, Gaddis illuminates such topics as the role of morality in American foreign policy, the relevance of nuclear weapons to the balance of power, and the objectives of containment. He even includes (and criticizes) an essay entitled, "How the Cold War Might End," written before the dramatic events of recent years, to demonstrate how quickly the tide of history can overwhelm contemporary analysis. Gaddis concludes with a thoughtful consideration of the problems and forces at work in the post-Cold War world.

Author of such works as The Long Peace and Strategies of Containment, John Lewis Gaddis is one of the leading authorities on postwar American foreign policy. In these perceptive, highly readable essays, he provides a fresh assessment of the evolution of the Cold War, and insight into the shape of things to come.