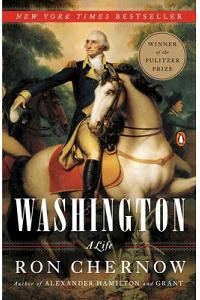 A gripping portrait of the first president of the United States from the author of Alexander Hamilton, the New York Times bestselling biography that inspired the musical.

Celebrated biographer Ron Chernow provides a richly nuanced portrait of the father of our nation and the first president of the United States. With a breadth and depth matched by no other one volume biography of George Washington, this crisply paced narrative carries the reader through his adventurous early years, his heroic exploits with the Continental Army during the Revolutionary War, his presiding over the Constitutional Convention, and his magnificent performance as America's first president. In this groundbreaking work, based on massive research, Chernow shatters forever the stereotype of George Washington as a stolid, unemotional figure and brings to vivid life a dashing, passionate man of fiery opinions and many moods. Winner of the 2011 Pulitzer Prize for Biography Ron Chernow's new biography, Grant, will be published by Penguin Press in October 2017. "Truly magnificent... a] well-researched, well-written and absolutely definitive biography" -Andrew Roberts, The Wall Street Journal "Superb... the best, most comprehensive, and most balanced single-volume biography of Washington ever written." -Gordon S. Wood, The New York Review of Books "A truly gripping biography of George Washington... I can't recommend it highly enough--as history, as epic, and, not least, as entertainment. It's as luxuriantly pleasurable as one of those great big sprawling, sweeping Victorian novels." -Hendrik Hertzberg, The New Yorker Lin-Manuel Miranda's smash Broadway musical Hamilton has sparked new interest in the Revolutionary War and the Founding Fathers. In addition to Alexander Hamilton, the production also features George Washington, Thomas Jefferson, James Madison, Aaron Burr, Lafayette, and many more.