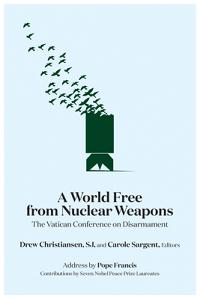 A World Free from Nuclear Weapons: The Vatican Conference on Disarmament

On November 10, 2017, Pope Francis became the first pontiff in the nuclear era to take a complete stand against nuclear weapons, even as a form of deterrence. At a Vatican conference of leaders in the field of disarmament, he made it clear that the possession of the bomb itself was immoral. A World Free from Nuclear Weapons presents the pope's address and original testimony from Nobel Peace Prize laureates, religious leaders, diplomats, and civil society activists.

These luminaries, which include the pope and a Hiroshima survivor, make the moral case against possessing, manufacturing, and deploying nuclear arms. Drew Christiansen, a member of the Holy See delegation to the 2017 United Nations conference that negotiated the Treaty to Prohibit Nuclear Weapons, helps readers to understand this conference in its historical context.

A World Free from Nuclear Weapons is a critical companion for scholars of modern Catholicism, moral theology, and peace studies, as well as policymakers working on effective disarmament. It shows how the Church's revised position presents an opportunity for global leaders to connect disarmament to larger movements for peace, pointing toward future action.